Jersey Jim is bringing his FunTastic Family Magic Show Fundraising program to Mar Vista Elementary School on Friday, November 20, 2015.  There will be two shows at 5 pm and again at 7 pm. 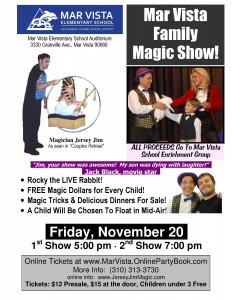 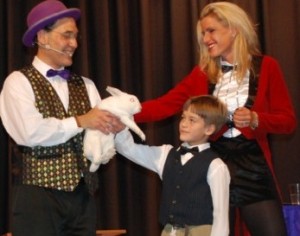 What can attendees expect? The FunTastic Family magic show is the same show that Jersey Jim performs at professional theaters. It features 90 minutes of unique entertainment complete with music, beautiful props, and Jim’s hilarious blend of comedy, audience participation, and grand illusion, including sawing art teacher Mr. Miceli in half with a power buzz saw! Jim is quick to reassure that all ages will be laughing at this comedy routine.

Tickets for the event are $10 & $8 in advance and $12 & $10 at the door. Tickets will be available the evening of the event as space allows. For more information,