Well, I just finished my shows at the Magic Castle this weekend and it was another great experience.  I heard time after time from so many of the audience members that they loved my shows.  The word got through to the top brass because they have asked me to come back asap for another round of shows.

It was extremely busy at the castle this weekend.  Every one of my magic shows were standing room only.  In fact, Sunday was so crowded that I had to add a 4th show that day to accommodate all the Magic Castle guests.

It was a great weekend at the Magic Castle for another reason:  three of my favorite fellow magicians were there as well.  Below is a picture of me with J. Neal.  Jonathan Neal is the classiest, most creative, talented, and charming magician I have ever seen.  J. Neal works constantly because he is in such high demand.  He has helped me in my own magical career by giving me advise about everything from how to hem a silk handkerchief to how to make a sleight of hand steal.

Below is a picture of Jersey Jim comedy magician with J. Neal.  This was taken backstage in the Palace theater at the Magic Castle just a minute before his show was to start.  My show in the parlor had just concluded. 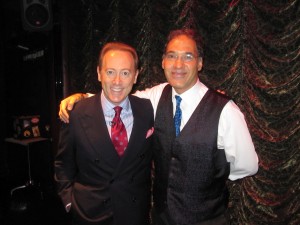 Another cool thing was that I tried out a brand new magical routine at the castle this past weekend.  I opened all my shows with this new routine.  I have to confess that these were the first times I had ever performed these routines!  You should never do this but I did!  I had a strong feeling that the routine would play well and I was correct.  It did play well.  Normally, you should work out a routine very extensively before presenting it.  I did on the job training with this one, however, and by Sunday it was fairly well polished.

Well that’s all for now.  I will let everyone know when Jersey Jim will be returning to the Magic Castle in the future.  Until then… magically yours, Jersey Jim Comedy Magician.