For years, my son, Wesley, who is now 8, has wanted to be involved in all of daddy’s magic shows, whether big or small.

Wesley would sometimes come to my public shows but I would not be able to pick him because I felt it wouldn’t be fair to the other kids who had never seen my shows before or had never helped before.

Needless to say, it was hard for Wesley to see it this way; he thought daddy was being very unfair.  I certainly wanted to pick him especially since I knew how much it upset him.  How could I not know with the looks he gave me!

Every time I called for volunteers, I would see my own son’s eager hand shoot up into the air, and his face would take on a pleading expression only to be disappointed when I picked a different child.

“You never pick me, daddy!” Wesley would bitterly complain.  “Why don’t you ever pick me?”  Apparently my patient explanations didn’t help him feel any better.

One year—I think it was when Wesley turned 5—he even had three magicians perform at his birthday party!  Two of my magician partners were nice enough to attend and bring their acts with them!

Still, I knew the day would come when Wesley might stop thinking daddy’s magic shows—and daddy himself for that matter—weren’t so cool.  I thought we better make some great memories while he was still young enough to be excited about it. 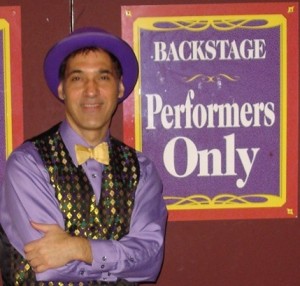 Backstage at the Magic Castle

The idea of bringing Wesley into the act got kicked into high gear once when I was performing at the famous Magic Castle in Hollywood.  Wesley was with me backstage and another magicians said how exciting a father-son magic act would be.

That started Wesley and I thinking and that’s when we got the idea for a new illusion concept that would feature Wesley and be built around his interests and talents.  That was the best part:  the fact that the ideas sprang from Wesley’s own interests.

As a performer, I was very excited about these new ideas since they were original presentations that had never been done before, and also because it was something Wesley and I could do as a father and son team.   (You’ll have to come see one of our shows to see what this new concept is!)

I set to work building the new illusion.  It took months of work, lots of wood, hardware, and money!  Many late nights and a last minute paint job, but it turned out terrific.  Here’s a picture of me at the shop. 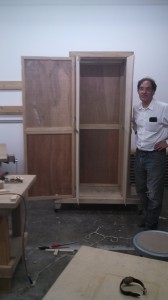 The first time Wesley and I performed the illusion, we had only rehearsed it twice!  Not a good idea!  But the show must go on and so there we were, father and son, backstage in a theater, with 550 people sitting on the other side of the curtain, which was about to go up on the second half of my 90-minute FunTastic Family Magic Show. www.funtasticmagicshow.com

Wesley wasn’t even nervous though.  He seemed eager.  He said, “Should I get ready now, dad?”  I said, “Okay.  You remember our cues?”  He nodded and got ready.  “You’re gonna be great!” I reassured him.  ” Just have fun.”  As a parent, it’s a million times more nerve wracking thinking of your child performing than yourself.  Who cares if I make a mistake.  I just want him to feel good about himself!

The curtain went up.  My partner wheeled out the illusion, the audience oohed and aahed at the cool sight of it.  The music swelled.  We turned the illusion around.  We opened up all the doors, showing that it was completely empty.  I even walked through it to prove it.

We closed it back up, the music came up again, and it happened:  what had a brief moment before been an empty cabinet now contained my son.  The audience was stunned.  A gasp went through the crowd, followed by spontaneous applause.

My son stepped out onto center stage and took a bow.  Half the audience stood up as they clapped for him.  And I saw what the audience didn’t:  Wesley turned to me and his face flashed a smile that was bursting with joy.  I felt like I was going to cry with pride for my little boy.  He had performed this new illusion perfectly, which wasn’t easy, and earned a standing ovation.  I hope that special moment made up for all the little shows when I had to picked other kids… 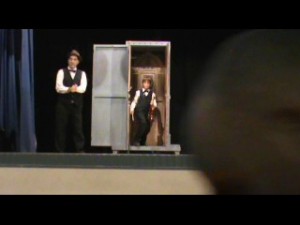